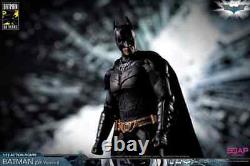 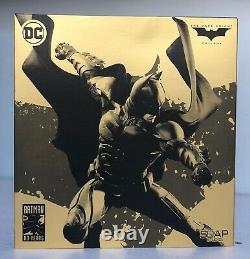 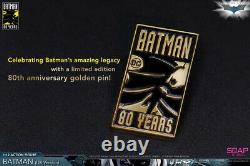 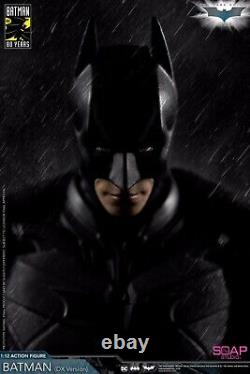 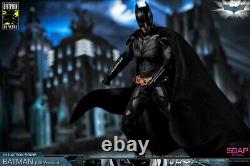 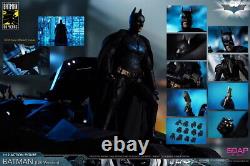 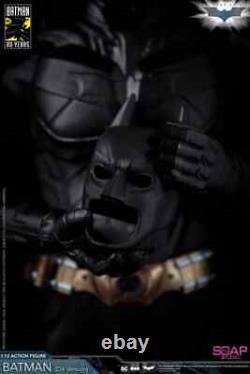 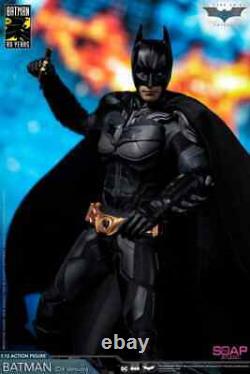 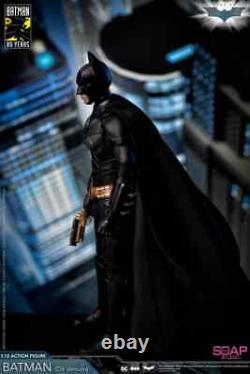 Item: THE DARK KNIGHT BATMAN "80 years" 1/12 Action Figure. Condition: New and Sealed, never opened. To celebrate the 80th Anniversary of Batman as the World's Greatest Detective, Soap Studio is lighting up the night skies by introducing Batman, our timeless hero to join the 1:12 Action Figure series Over the past ten years, superheroes have gone from garnering a narrow audience to achieving worldwide acclaim with a level of popularity never seen before. The sought-after Dark Knight Trilogy is a set of three Batman movies directed by Christopher Nolan that are highly rated. While THE DARK KNIGHT in 2008 is even being considered as one of the best superhero movies of all time.

At the same time, it garnered 8 Oscar nominations and won 2. This collectible figure stands approximately 16.5cm, designed after THE DARK KNIGHT (2008) characters on-screen appearance with 37 movable joint and highly detailed costumes and accessories.

The Batsuit in trilogy is designed by Lindy Hemming, who is a famous UK costume designer and also Oscar winner. The Batsuit in TDK has been completely redesigned for better feeling of movement and lightness, all the bulk is gone. The Batsuit had cowl separated with the neck piece that inspired by the motorcycle helmet to increase the flexibility. To better reform Batman's outfit inside movie series, the Batsuit is made of different materials which highlight Batman's muscular body shape and allow our figure has greater mobility. The figure comes with changeable facial expression, glider pack, grappling gun, sticky bomb rifle, batarangs, miniature mines, Batman cowl, cape, fist hands, fighting hands, guns holding hands, weapon holding hands, batarang holding hands, relaxed hands and several sculpted head.

This figure comes with a spanner for player changing Batman facial expression. To allow players flexibly build their own "movie stage", a backdrop is also attached to the set. Facial sculpture with high simulation, meticulous painting and clothing made of real fabrics perfectly present the character played by Christian Bale!

To celebrate the Dark Knight's amazing legacy, our 1:12 Batman is bundled with an 80th-anniversary golden pin! Thank you very much for looking. All items are guaranteed to authentic as described. I apologize for any inconvenience this may cause, and appreciate your assistance in helping us do better. This item is in the category "Toys & Hobbies\Action Figures & Accessories\Action Figures".

The seller is "luck_day2005" and is located in this country: CN. This item can be shipped worldwide.