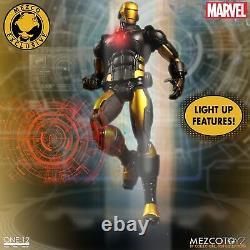 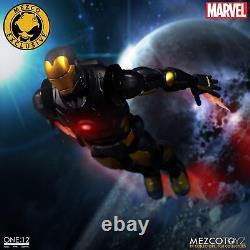 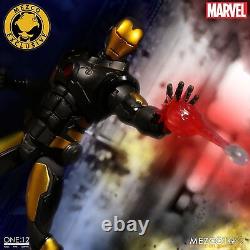 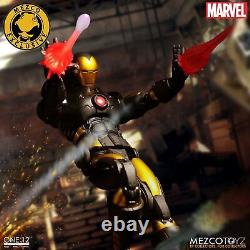 The One:12 Collective Iron Man: Armor Model 42 Edition features a light-up function that illuminates Iron Man's arc reactor, the source of his power. Designed with real metal components, the armored Avenger's comes equipped with a range of booster and blast effects, including a chest beam repulsor that lights up when attached to the arc reactor. Powered by numerous Repulsor Tech cores, the Armor Model 42 was developed by Tony Stark initially for testing new technological developments but was later upgraded for battle. Featuring modular abilities and new A. The Armor Model 42 adds to Stark's impressive armory of Iron Man suits. THE ONE:12 COLLECTIVE IRON MAN FIGURE FEATURES. One:12 Collective body with over 30 points of articulation. Six (6) interchangeable hands including. One (1) pair of fists (L&R). One (1) pair of posing hands (L&R). One (1) pair of blasting/booster hands (L&R). One (1) chest beam repulsor. Two (2) repulsor beam FX. Two (2) hand booster FX. Two (2) foot booster FX. Two (2) gauntlet firing missiles. Two (2) rocket firing hip discs. One (1) One:12 Collective display base with logo. One (1) One:12 Collective adjustable display post.

Each One:12 Collective Iron Man: Armor Model 42 Edition figure is packaged in a collector friendly box, designed with collectors in mind. This Product is for Adult Collectors. It may contain sharp points, small parts that are choking hazards, and other elements that are not suitable for children under 15 years of age.

Any product you return must be in the same condition you received it and in the original packaging. We usually respond within 24 hours on weekdays. Thank you for shopping at our store.